In early 1897, work commenced on a sleek 30ft yacht named Dorothy in the James Bay boatyard of John J. Robinson. Although nothing remains of Robinson’s busy shop — now the site of the Laurel Point Inn — the vessel he built is still ‘above the waves’. Today, Dorothy is considered the oldest sailing yacht in North America’s Pacific Northwest and is a major artefact in the Maritime Museum of BC’s ((MMBC) collection. She’s famous for her age, her sailing adventures, and for winning many races over her working career. She’s a lovely looking vessel with beautiful lines and a simple, clean design.

Dorothy was on Gabriola Island with shipwright and artist, Tony Grove for 10 years. Tony did restoration work on Dorothy from 2013 to 2022 with funds raised from private donors who were keen to see Dorothy restored for public viewing once again.

Dorothy is currently at the Ladysmith Maritime Society for further restoration work. 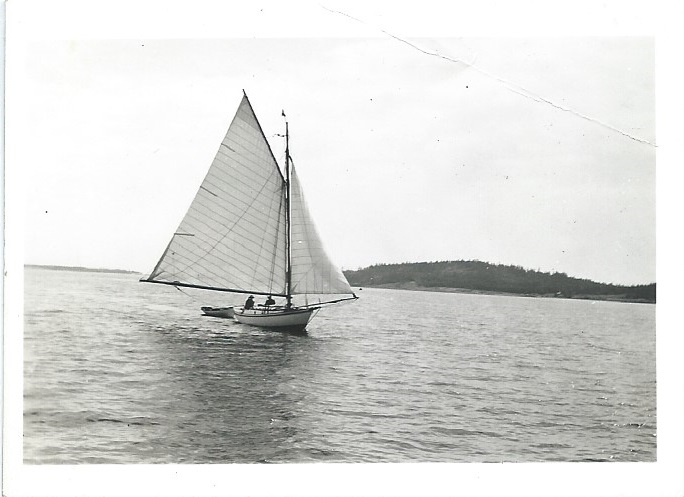 Click here for more information on Dorothy and Tony’s work up to 2014.

A big voyage for a small boat! Dorothy travelled from Gabriola Island to Ladysmith thanks to a free ride on BC Ferries. Further restoration work will be carried out at Ladysmith Maritime Society.

Work continues on Dorothy–here is the latest from artist and shipwright Tony  Grove!

Here are the latest videos of Tony’s work on Dorothy!

Watch these videos from Tony Grove of Dorothy going into the shop for work to continue!

In fall 2020, the MMBC Board gave the green light for Shipwright Tony Grove to resume work on Dorothy at his boatyard on Gabriola Island. This 30-foot (7.41m) gaff cutter or sloop has been at Tony’s yard for several years, but restoration was suspended during the uncertain period after MMBC was evicted from Bastion Square. Dorothy was built of red cedar on oak frames in 1897 at a small boatyard on the site of today’s Laurel Point Inn. She quickly established a reputation as a fast racer, had several local owners over the decades, and was donated to the museum in 1995.  The museum has comprehensive documentation about Dorothy, which has held unbroken official registration since first built.

Tony had already done extensive repairs to the boat’s stem/keel, installed several new floor timbers, and replaced keel bolts. He also fitted many “sister frames” where the old ones had deteriorated (see picture).  All the paint was stripped off the hull and caulking material removed from between the seams (“reefing out the seams.”).  Tony then repaired several of the plank seams; from finding different caulking and paying materials removed he could tell that Dorothy’s seams had never been completely reefed and re-caulked, but rather “spot caulked” over the years where problems had occurred.

Dorothy is now back in Tony’s workshop where over the next several months he will be caulking the seams with a combination of oakum and cotton and “paying” them with putty. He will be doing many other tasks including installing and varnishing a new rub rail, fitting  and chain plates (metal plate on deck to take shrouds), inspecting the bowsprit, sanding, priming and painting the hull including the toe rail, preparing and repainting the cockpit, and refinishing and varnishing all exterior bright work. Dorothy’s interior was always spartan; Tony will be fitting two bench seats in the cabin and suitable floorboards. 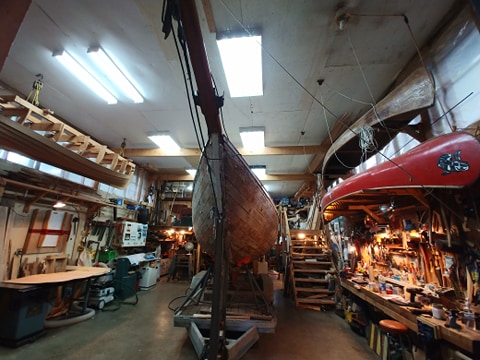 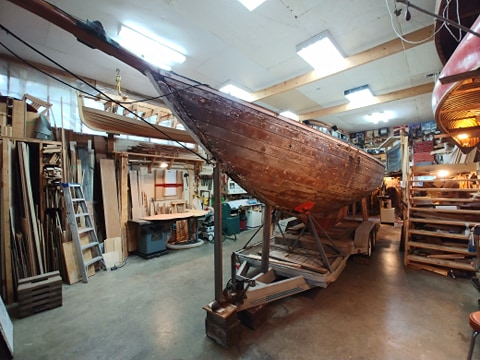 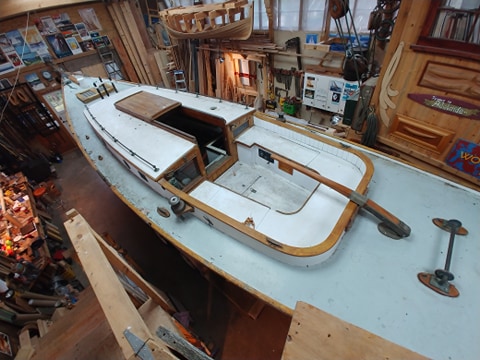 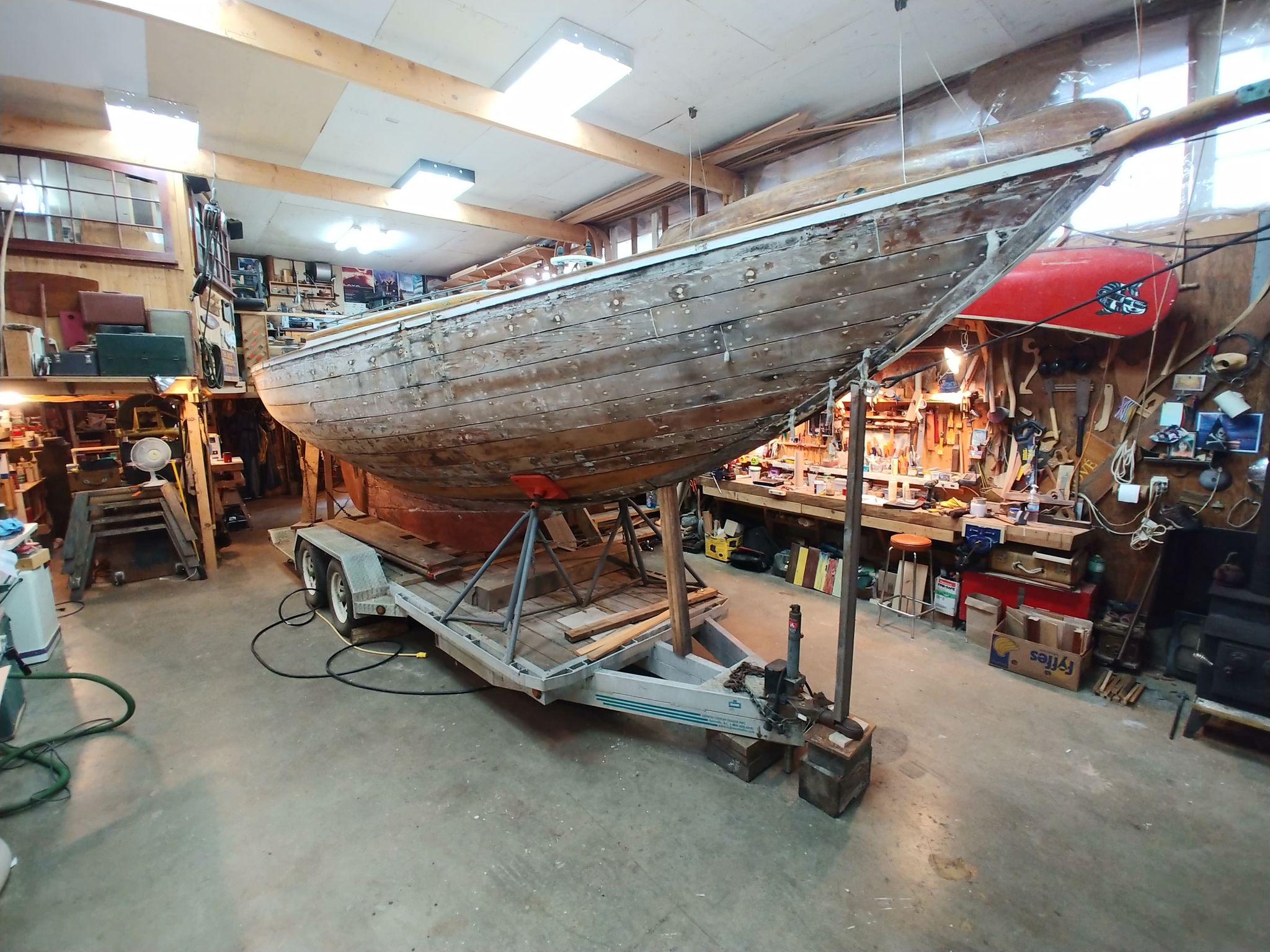 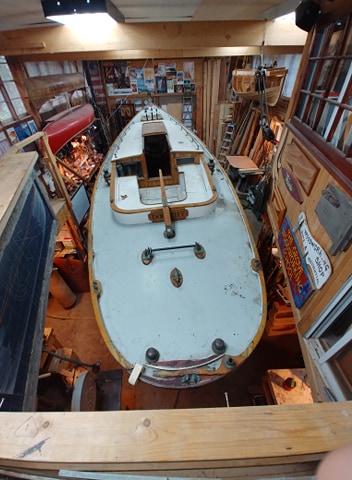 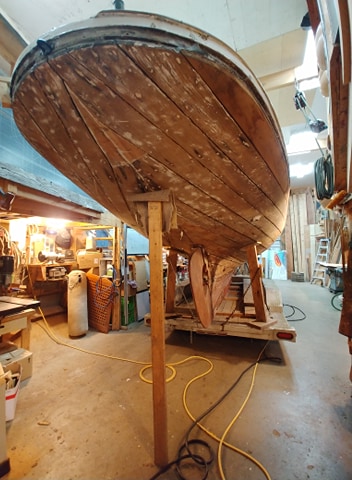 These photos show Dorothy back in Tony’s workshop for restoration work to continue.

Dorothy is a window on local wooden boatbuilding more than 120 years ago and a living link to the early years of yachting in our area when Queen Victoria was still on the throne. She had been designed by a well-known British yacht designer ad later Olympic sailor, Linton Hope. MMBC is fortunate in having a fund allocated for Dorothy to pay for the restoration. It has been built up over the years thorough targeted donations and a lumpsum received from a volunteer group in  Ontario  who had hoped to restore a  wooden yacht built in New Brunswick  a few years before Dorothy; when their project faltered they generously turned their remaining funds over to Dorothy. Long-time museum members will remember how John West assisted by Eric Waal spearheaded the current restoration that was paused when the museum encountered heavy seas.

Tony Grove is a well-known expert in building and repairing wooden boats with a passion for these examples of skilled design and construction- and in particular, our Dorothy. Check back here for regular updates on Tony’s work on Dorothy.