An Award For A Judge 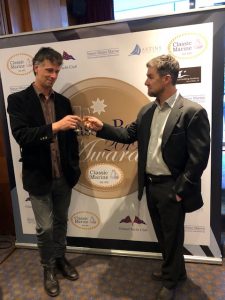 Rob Abernethy, Festival judge, along with his business partner, Jean Gaudin, and the crew of Abernethy & Gaudin Boatbuilders Ltd. received a prestigious award earlier this year for the restoration of the classic British cutter Carlotta. The principals of the Brentwood Bay boatyard travelled all the way to the Royal Thames Yacht Club in London to receive the ‘Restoration of the Year Award’ from Classic Boat Magazine for their outstanding work on the 1899 – built Carlotta. The lovely old cutter also received the ‘Centenarian Award’ from boating aficionados who voted her in for the top position in both categories. 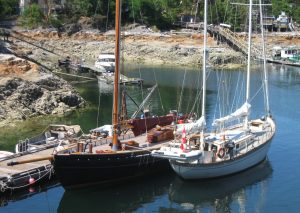 Carlotta (black) next to the Passat.

As most owners of classic boats know, the ‘care and feeding’ of their charges is a never-­‐ending thing and we do not embark on this stewardship lightly. Carlotta, originally built as a protection cutter, and now adopted into the Bristol Channel Pilot Cutter fleet, was purchased by Canadian Peter Heiberg in England and sailed to British Columbia virtually without an engine. (There was an engine, but like a banker’s loan to those who really need it, it was seldom forthcoming!) After Peter’s initial work in keeping her seaworthy and in commission, the Carlotta was sold to Steve and Barb Mohan who, along with their young son Jasper, undertook a loving and lengthy restoration with limited financial resources but great enthusiasm and attention to detail. Michael Wright from the U.K., took over from the Mohan family and placed Carlotta in the expert hands of Abernethy and Gaudin for still another extensive two-­‐year refit in 2016 and 2017. The cutter was then shipped to the Elephant Boatyard on England’s south coast for completion of this latest (but not the last!) reincarnation. 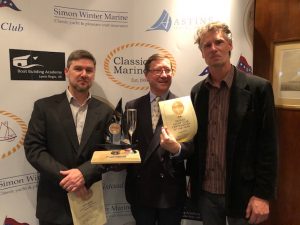 The Classic Boat Magazine award is fitting tribute to the good work that a small yard like Abernethy & Gaudin can accomplish: on time, within budget and to high standards. And a tribute to owners like Peter Heiberg, the Mohan family and Michael Wright who spent the time or money or both to keeping these classics alive.