In search of fame and fortune Captain John C. Voss and Norman K. Luxton, in 1901, formed an unlikely partnership to sail a small boat around the world. They chose a dugout whaling canoe from the west coast of Vancouver and converted it into a three-masted schooner.

Untested and untried, the Tilikum, (translating as “Friend” in the Chinook trading language) set out with the veteran master mariner Voss and the young journalist Luxton from Oak Bay BC bound for Australia. The Tilikum proved to be a successful sea voyager but for the crew the physical and mental challenges proved taxing. At Suva, Fiji, Luxton quit the voyage.

Forced to find a new Mate, Voss engaged Louis Begent, the first in a long chain of sailing companions. Begent was lost overboard in a tragic accident and Voss was forced to sail on to Australia single-handed.

Carrying on toward his goal of circumnavigation Voss paid his way by exhibiting the boat at all his ports of call. Together he and the boat became media sensations of the day, their adventures were reported in hundreds of newspapers around the world. His exhibit and his public lectures were attended by ever-increasing numbers of visitors.

The Mates found conditions on the boat cramped and unpleasant, while Voss thrived on the adventure showing supreme confidence in his little craft. The collection of Mates included “The Tattooed Man of Australia”, a former member of Robert Scott’s South Polar Expedition, and various characters seeking adventure.

The voyage carried on to New Zealand, South Africa, South America and ended in 1904 in London UK where Voss exhibited the Tilikum in the Naval and Fisheries Exhibition of 1905. Afterwards she was sold into private hands but proved to be unsuccessful as a yacht. Successive owners, frustrated by her configuration, gave up on her and by the 1920s she was a derelict in the Thames Estuary.

In 1930 she was repatriated by the City of Victoria and the BC Government only to spend 30 years outside on display, cared for by members of the Thermopylae Club. In 1965, about to become homeless the Tilikum was acquired by the MMBC as its collection centrepiece.

The story of the vessel, the crew members, and the saga of restoration and preservation is unique in the world. She still holds world records and is a testament of British Columbia prowess in nautical history. 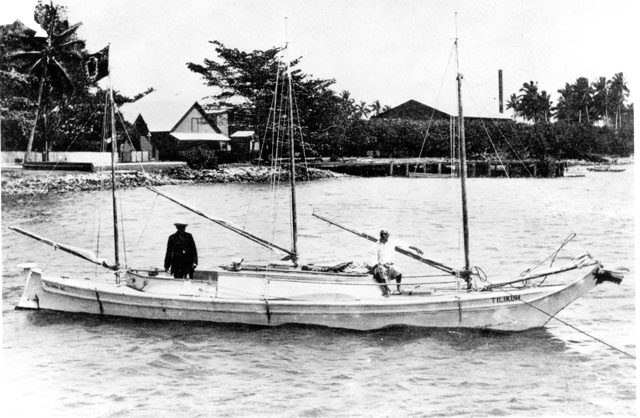