Trekka was built by John Guzzwell in Victoria and launched into the Inner Harbour in August, 1954. Her keel had been laid, clamped, and glued-up in the boiler room of the YMCA and the rest of her building done in a store-room at the rear of Johnny Bell’s Fish and Chip Shop on View street. Trekka means ‘to journey’ and she did – from Victoria around the world and back again!

Departing on 10 September 1955, John Guzzwell sailed Trekka to the Hawaiian Islands via San Francisco. From there his route was southward to the South Pacific Islands with New Zealand as the planned destination.

Trekka was laid up for 16 months in New Zealand while her master joined Tzu Jang to crew with Miles Smeeton. John Guzzwell returned to New Zealand in December 1957and readied Trekka for a continuance of the voyage that would see Trekka survive a cyclone and take him through the waters of the Great Barrier Reef of Australia, and into the Indian Ocean. The little vessel later safely passed the stormy Cape of Good Hope to enter the Atlantic Ocean and, in time, the Pacific Ocean again by way of the Panama Canal.

Trekka completed her epic voyage when she returned to Victoria on 12 September 1959. She was the smallest vessel to have circumnavigated the globe. A few months later John Guzzwell sailed her to Hawaii where she was sold. Later she changed hands again and completed a second circumnavigation with her new owners, the Cains. Sold again to Eric Abranovich of Honolulu, who owned her for five and a half years.

In the spring of 1980, members of the Thermopylae Club of Victoria commenced a fund-raising drive to bring Trekka home for good. Eric Abranovich set out alone from Honolulu on August 10th and after a not uneventful voyage of more than 3,500 miles and about 50 days, he brought the tiny vessel into Victoria Harbour to be greeted by hundreds of well-wishers including John Guzzwell, her builder and original master. 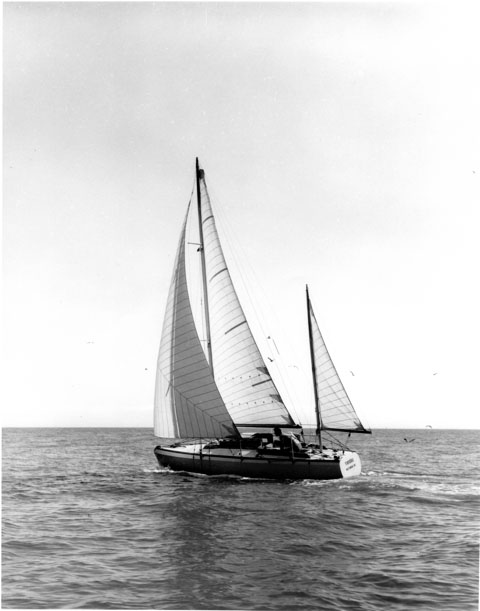