An Evening of Sea-Themed Literature, featuring Spindrift: A Canadian Book of the Sea 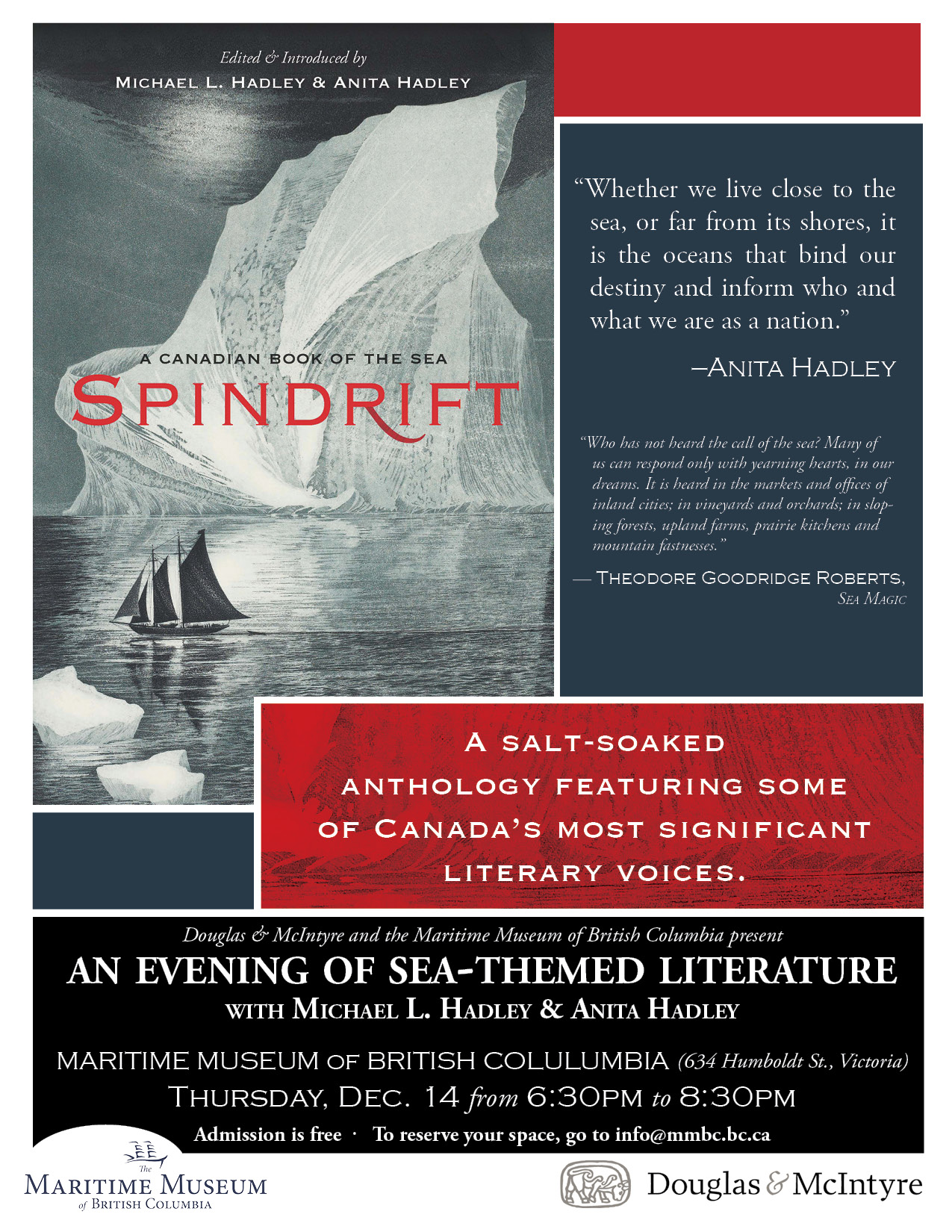 Join us Thursday, December 14th for an evening of salty sea tales, with Anita and Michael Hadley!

Michael and Anita Hadley, the editors of the Canadian bestseller Spindrift: A Canadian Book of the Sea, will be dipping into Canada’s literary history with an evening of readings that celebrate our maritime heritage. Join us at the Maritime Museum of British Columbia on Thursday, December 14 at 6:30 pm. Refreshments and light snacks will be provided.This is a free event, however, seating is limited. You can reserve your space through info@mmbc.bc.ca.

Spindrift: A Canadian Book of the Sea (Douglas & McIntyre, $36.95) is an anthology of 170 pieces of writing from over 130 of Canada’s most significant literary voices. In it, historical non-fiction, classic Canadian poetry and sea-themed contemporary fiction pool together. The passages range from tales of nautical exploration to harrowing accounts of disaster at sea to humorous portraits of coastal characters. Lucy Maud Montgomery writes of characters that revel in the romance of the Atlantic. Farley Mowat reflects on powerful natural forces and Pauline Johnson (Tekahionwake) compares the temporary existence of human lives to the eternity of rocks on the Salish Sea.

This anthology was inspired by an evening of nautical readings from around the world at the Maritime Museum. The Hadley’s imaginations were tweaked, and they delved into the rich bounty of Canadian writing that  showcases the relationship of all Canadians to the three oceans that frame our country. As Anita Hadley writes in the introduction: “Whether we live close to the sea, or far from its shores, it is the oceans that bind our destiny and inform who and what we are as a nation.”

Michael L. Hadley is an award-winning writer, multidisciplinary scholar, yachtsman and former naval officer. He is the author of many books including God’s Little Ships: A History of the Columbia Coast Mission (Harbour Publishing, 1995). He is Professor Emeritus at the University of Victoria and a Fellow of the Royal Society of Canada.

Anita Hadley taught at Royal Roads Military College where she co-authored Gens de Chez Nous (Irwin Publishing, 1985), drawing on a rich collection of French-Canadian literature. She also collaborated with her father, renowned cinematographer Osmond Borradaile, on his memoir Life Through a Lens (McGill-Queen’s University Press, 2001). At sea, she is Michael’s co-skipper as they explore the coastal waters of BC under sail. The Hadleys live in Victoria, BC.