What to do with a Drunken Sailor: The SS Beaver 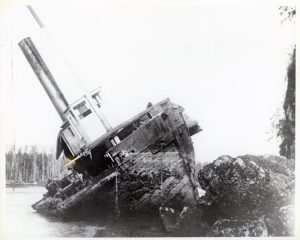 There’s a sound all sailors fear:

The shuddering crunch of a vessel against rock.

On July 26, 1888, it reverberated through the first narrows of Burrard Inlet, as the SS Beaver ground to a halt, perched on the rocks by Prospect Point in Stanley Park. The area is known as Chay-thoos or “high bank” in the Skwxwu7mesh (Squamish) language, and Pauline Johnson’s accounts of Skwxwu7mesh stories describe a spirit-being in the area that can bring storms and rain.

It difficult to say if spirits played a role in the SS Beaver’s untimely end, but according to reports in the Daily News Advertiser on July 28, “The wind was blowing pretty fresh and with the strong tide running carried the famous old craft onto the rocks just at the entrance to the Narrows,” and other reports contribute foggy conditions to the Beaver’s misadventure. However, rumours about the wreck abound, and Vancouver’s first archivist, Major James Matthews, diligently collected them.

These rumours seem to suggest an alternate culprit besides wind and fog.  A Vancouver pioneer named Simson reported to Matthew that the Beaver’s Captain Marchant was “an old drunk” and that the crew “were all drunk the night the Beaver went on the rocks.”

Another report, from A.W. LePage, who knew Capt. Marchant, claimed “(Marchant) said the passengers on the boat were going back (to a logging camp) and some of them were pretty well ‘lit up,’”

“They had forgotten the liquor — call it ‘booze’ if you want to — and they wanted (Marchant) to turn back to Vancouver so that they could get a supply. So he turned back, and in turning around he ran ashore.”

Another steamship, the SS Muriel, hastened to the Beaver’s rescue, but was unable to remove the ship from the rocks. Luckily, all of the crew managed to get ashore safely, and the only casualty was the old ship itself.

The SS Beaver remained perched and rotting where she ran aground for another 4 years. The wreck became a popular destination for Vancouver-ites, who stripped the boat of anything notable before it finally slipped under the waves in 1892. Some of the objects that were taken from the wreck were made into trinkets like cigarette boxes or canes, which can found in the collection of the Maritime Museum of BC to this day.

Before the SS Beaver struck the rocks, the handsome brigantine was a fixture of the Pacific Northwest Coast, with its two sails and steam-propelled paddle wheels. The Beaver was built at the Blackwall Yard in London for the Hudson’s Bay Company in 1835, before sailing across the Atlantic and around the Horn to arrive at Fort Vancouver in 1836.

After Fort Victoria was established as the main west coast post for the Hudson’s Bay Company, the SS Beaver worked as a fur trade vessel, traveling throughout the whole Pacific Northwest – from California to Alaska – but Victoria was always its home port. 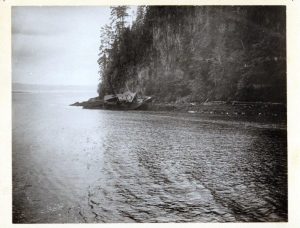 and Transportation Co. as a towboat, carrying loggers to camps and dragging log booms to mills. On the night the SS Beaver met her inglorious end, she was heading to one of the Gulf Islands. Another theory about the wreck claims that the Beaver was towing a log boom on that fateful night in July, which made it difficult to navigate the passage.

Was it the fog, the wind, the log boom, or the booze? We will never know for sure the cause of the Beaver’s demise, but she lives on in the memories of our rich maritime heritage.