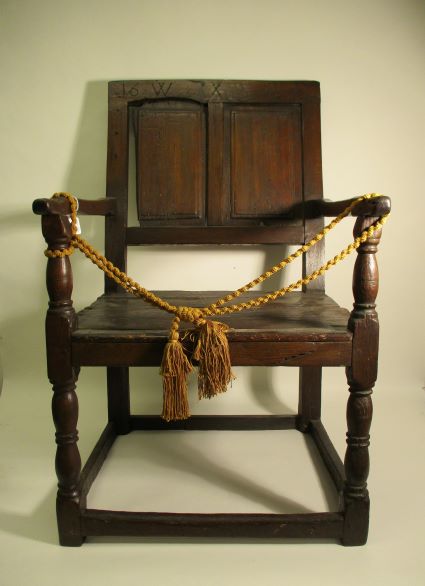 This chair was built in 1962, and is said to be from the wood of Almirante di Florencia, a galleon in the Spanish Armada. The Spanish Armada was famous fleet of Spanish vessels that tried to invade England in 1588. They were unsuccessful against the English Navy. Several of the surviving ships, including the Florencia, by sailing North in the Scottish Isles.

It is believed that the Florencia anchored in Tobermory Bay on the Isle of Mull. It is still a mystery as to why or how this vessel sank. As the pieces of wood washed ashore, local craftspeople collected the oak. They built several pieces of furniture, including this chair.

This chair has existed for hundreds of years, being passed down through families. In the 19th Century it was brought to Vancouver when the descendants immigrated to BC. The rest is history as the chair made its way into our collection.