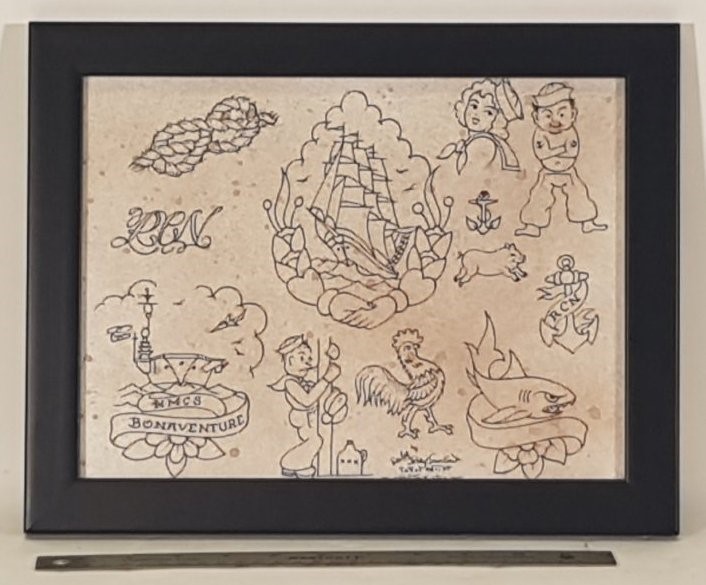 Made by Nova Scotian tattoo artist “Sailor” Jerry Swallow–not to be confused with Sailor Jerry the American tattoo artist from Hawaii, whose tattoos are what we commonly associate with sailing. Tattoos have been around for over 4000 years. The Ancient Greek word for tattoo is stigma. Tattoos were not associated with sailing until the late 1760s, when, while exploring the South Pacific, Captain Cook and his crew connected with the Māori, who are well known for their sacred tattooing practices called moko. Sailor who travelled with Cook got tattoos from the Māori, as something of a souvenir. Some classic sailing iconography can be seen on these flashes. Tattoos were used to represent achievements, superstitions, rank–all in an aesthetic common language. A knot can mean that you were a deck hand at one point. An anchor can represent stability or that you have sailed the Atlantic ocean. Roosters and pigs were supposed to keep a sailor from drowning. When ships would sink, the roosters and pigs were kept in crates that floated. They would often be the sole survivors of shipwrecks. A stylized RCN stands for Royal Canadian Navy. For many years tattoos have been the mark of sailors, and tattoos were widely popularized by them in the West.