Sailing on the Edge: The Garthsnaid 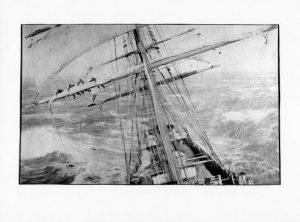 This photo was obviously taken in the days before “Safety at Sea” seminars and before the advent of self-furling sails. It dates from 1919 or 1920. It was taken by Alexander Harper Turner who was 19 years old and was acting as Second Mate on the barque Garthsnaid out of Montreal. It was a 3-masted steel barque, built in 1892 by A. McMillan and Son of Dumbarton, Scotland, with a tonnage of 1416. It went to George Milne and Company in Aberdeen. They named it Inversnaid. In 1916 it was bought by the Marine Navigation Company of Canada and later renamed Garthsnaid.

The Garthsnaid was rounding Cape Horn when one of its notorious storms hit. The four sailors had reefed the sail. The vessel was taking on water. One can only assume that the rest of the crew were below, manning the pumps. The four sailors had to hang on or they would have been dangling by their feet from the rope or plunging into the rough sea with little or no chance of recovery. This was what ‘before the mast’ meant in early sailing vessels. The sailors would have been wise to remember the old adage — reef early and reef often! Over the years, the improvements to safety equipment (including safety harness, self-inflating life jackets, MOB personal location devices, etc.) and occupational safety rules have taken some of the risk out of this activity aboard today’s tall ships.

This photo of Garthsnaid is all over the internet and on lists of the best sailing photos ever. Dates and descriptions and even the spelling of the ship’s name vary in these reports. The spelling ‘Garthsnaid‘ is what was used in Lloyd’s and in histories of the ship.